Welcome back to Sweet Saturday Samples. Sorry I missed last week–Thanksgiving and all. So, I thought I’d start off the holiday season with a holiday sample. This is from my romantic suspense, Obsession, which takes place over Christmas. As you can tell, this is a very emotional story. 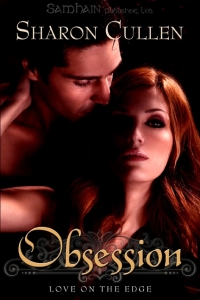 Her gaze darted around the room, flitting here and there, everywhere but at Alex. She settled on the twinkling lights of the Christmas tree. Her attention sharpened, focused. She pushed herself up from the couch and walked with slow, hesitant steps to the tree where she touched the apple-shaped bell, sending a merry tinkling through the still house. Her gaze shifted to the bear pulling a tree behind him and then to the red glass globe painted with the Cincinnati skyline.

Memories hit her with enough force to double her over in pain. Only the weight of Alex’s watchful gaze kept her back stiff.

When she swung around to face him, his brown eyes bore into hers, daring her to say something.

“I had every right.”

She took an involuntary step back, startled at his angry tone. He had a tight hold on the beer bottle and his shoulders were tense. He acted as if he hadn’t known. Surely his attorney had told him she’d canceled the court date. Surely Alex had known she would never dissolve their marriage while he was in the hospital.

His lips thinned into a tight line, his eyes narrowed.

But he knew now.

“I’m sorry. I thought your attorney told you.”

The day he put the ornaments back on the tree. “I would never do that. Divorce you while you were in the hospital.” She sat on the couch.

The pinched look around his eyes softened. He plucked her hand away from her robe and held it in his. The warmth of his skin heated her in a way the flames from the fire couldn’t.

“When I moved out, I was angry,” he said. “Angry because you couldn’t accept me for who I was. But I thought, given time, you’d realize… Hell, I don’t know, Tess. I guess I thought you would ask me back.” He turned her hand in his, so their fingers intertwined and she felt the smooth band on his finger. When had he put his wedding ring back on and why hadn’t she noticed until now? “Why didn’t you ask me back, Tess? What’d I do that was so awful you’d throw me away forever?”

Maybe she should have demanded less, requested more. Maybe if she’d asked him to go to counseling instead of assuming he’d refuse, they’d be looking ahead to a lifetime together instead of back at a failed marriage.