My post, What Are You Thankful For, is up on Shawna’s blog. Check it out and leave a comment telling me what you’re thankful for this year.

Excuse me if I start to cry, but this is an emotional post for me. We here at the Cullen house are especially thankful this year and you can bet your bottom dollar (whatever that means) that we’ll be thanking God before we dig into our Thanksgiving dinner today.

On May 9th my husband left the house to go on a bicycle ride with our Labrador retriever, Winston. This is something the two do all the time. John holds the leash and Winston runs alongside him and they both get exercise. We don’t know exactly what happened this past May 9th, but John fell off the bike. He wasn’t wearing a helmet. He cracked his skull in two places and suffered a traumatic brain injury. John was rushed by helicopter to the nearest trauma hospital where his condition quickly deteriorated. He was taken into surgery and part of his skull was removed to allow for the swelling.

There is a poster on the wall in the waiting room of Neuro ICU. Its of a man in a hospital bed and all of the machines surrounding him. Apparently its supposed to prepare people before they go into the ICU, but no picture could adequately prepare me for what I was soon going to face. The first seventy-two hours were critical. The doctors wouldn’t give me any sort of prognosis other than he’d survived so far. He spent nine days in a coma, fourteen days in ICU and eleven days in a rehabilitation hospital where he had to relearn how to walk, to talk, to eat and everything in between.

This past year has taught me that friends can be more like family, that acquaintances can quickly become lifelong friends and that there is an inner core to all of us where we draw strength, hope and courage. 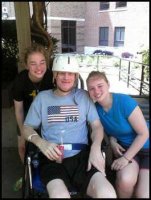 3 weeks after the accident

Today I am thankful for the woman who called 911, for the EMTs and their quick response, for the ER doctors when they recognized the severe trauma and had Air Care on the way before I even arrived at the hospital. I’m thankful for the neuro surgeon whose night was interrupted for emergency surgery. For Dr. Jordan Bonomo, John’s neuro ICU doctor, for always being patient and most of all positive and for never sugar-coating anything. I’m thankful for the numerous nurses who nursed John back to health with dignity and respect.

I’m extremely thankful for Dr. Bavishi, John’s neuro rehabilitation doctor and for all of his speech, occupational and physical therapists: Lauren, Stephanie, Allie, Courtney, Amy, AmyII, Karen, Melissa and Jonathon–there is a special place in heaven for all of you.

I can’t even begin to express my thanks and gratitude for the friends and family who picked up my kids from home and drove them to the hospital every day (thank you, Pattie!), for John’s co-workers who showed up that night and sat with me until 4am and who continued to sit with me for two straight weeks. Who left their homes and families to come to the hospital late at night so I wouldn’t have to walk to my car alone, who cut our grass on their days off. Who grocery shopped for me when I couldn’t. Who laughed with me and cried with me and ate numerous meals at Chipotle with me because that was the only decent place to eat around the hospital. THANK YOU!

For the hundreds and hundreds of prayer warriors who put John on their prayer lists. He was an international sensation. From England to Scotland to the US, thousands prayed for John’s recovery. God bless each and every one of you. Prayers work. John is proof.

John and I today

John finishing his first 5k. Five months after he learned how to walk again

6/12 - Her Dark Knight (Carina Press) will be released in print and sent to all Harlequin subscribers in January, 2013. The book will also be available in print on Harlequin.com

3/12 - Wherever You Are is now available in paperback

Multi-Author Blogs I'm a Part Of

Click on the image to visit the Romance@Random blog