Her eyes flew open and she stared up at the stars. Her face grew hotter. Not with embarrassment, as he would probably assume, but with anger. How dare he take her one good memory and taint it with an apology. Now she felt cheap, when before she felt wanted and cherished and treasured.

Boldly, almost daringly, she stared at him. Her eyes were more green than blue today, matching her shimmering gown. At any other time, in other circumstances, he would have admired her beauty, but his frustration wouldn’t allow it. Not when she was an interloper on his ship.

“You are aware we are sailing to Boston?” he asked. “Boston is nowhere near Barbados.”

Her smile didn’t dim. In fact it appeared to brighten as if she knew he was irritated and it pleased her. Which only served to drive his irritation straight into anger. Emmaline Sutherland was a distraction he could ill afford. Good God, they would spend five weeks together on this ship.

Impossible. He simply could not take her to Boston.

Except they’d already left port and if he were to stay on schedule, he couldn’t possibly drop anchor now.

“I am aware of the location of Boston on the map, Captain.”

“And what business have you in Boston, Mrs. Sutherland?”

He swore her jaw muscles tensed, but more than likely it was the shadow cast by the sails.

What possible “personal business” did a woman have in Boston? If her husband was any sort of man he wouldn’t allow his wife to gallivant around the world unprotected on some mysterious “personal business”. His irritation now encompassed Mr. Sutherland. For allowing his wife to travel alone, for not protecting her. For not being here. Because if he were here, Nicholas wouldn’t be responsible for her.

“I admit to being away from society for some time. I wasn’t aware that the best dress makers are now in the colonies rather than England and France.” What the hell happened to him when he was around this woman? His tongue had a mind of its own, it seemed. He was about to apologize for his lack of manners but her narrowed eyes stayed the words and suddenly he wanted to see that back straighten again and those eyes flash fire at him. Because she was exquisitely beautiful when angry.

“Not all women are concerned with fashion,” she said between clenched teeth.

He barely stopped himself from grinning. Damn but she was beautiful. “I can’t imagine what other personal business a woman alone would have in Boston.”

Did she bar her teeth at him?

He was insufferable, dictatorial, sometimes rude, with a sense of entitlement that being a prisoner would never banish.

He had dark blue eyes that saw too much and well-formed lips too quick to offend.

And yet, she was drawn to this irresistible, irritating, irrational man who willingly left his warm bed to help her tend a man he believed was already condemned to a watery grave.

Her head jerked up and she quickly wiped the tears from her face.

Here it is. The cover for my February release with Random House’s Loveswept Line. I love getting new covers. It’s like Christmas in my inbox.

From The Notorious Lady Anne, out in February, 2013 with Loveswept (cover pending)

Gone was Lady Anne, in her place just Emmaline. Two components of one person, making a whole that baffled him but he wouldn’t think about it now.

Tonight was for them, Nicholas and Emmaline. No one else. He curled onto his side and tucked her into him. He fell asleep with the scent of her hair—ocean breeze and warm sunlight.

So I’ve been tagged in this meme by Kate Meader. I’m not even sure what a meme is. My kids could tell me but if I ask then I’m showing how uncool I am so I’ll refrain from asking. I’m not much into sending chain letters or telling people if they don’t do something then bad luck will plague them for seven years. Apparently this is nothing like that. It’s just a way for writers to showcase their writing and to get others involved and to get readers to follow. So this time I’ll play.

Since I’m only on page 56 of my current wip I’m going to use the last wip I finished (which, btw, will be released with Random House’s Loveswept line in February, 2013.).

From The Notorious Lady Anne:

Emmeline smiled at Shamus. “Not for long, he won’t be.”

“Fine.” Alphonse flicked a finger at Shamus. “Take him.”

Emmeline ordered Shamus to row them to the Delilah. Expression mutinous, his wary gaze darted from Emmeline to Phin as he rowed.

Emmeline ignored Shamus and watched Addison, who kept his head turned away, refusing to look at her, his shoulders straight, his chin high, his eyes frigid. Despite the torn and bloodied clothes and the mussed hair, something inside her stirred.

Here are the 7 authors I’m tagging: 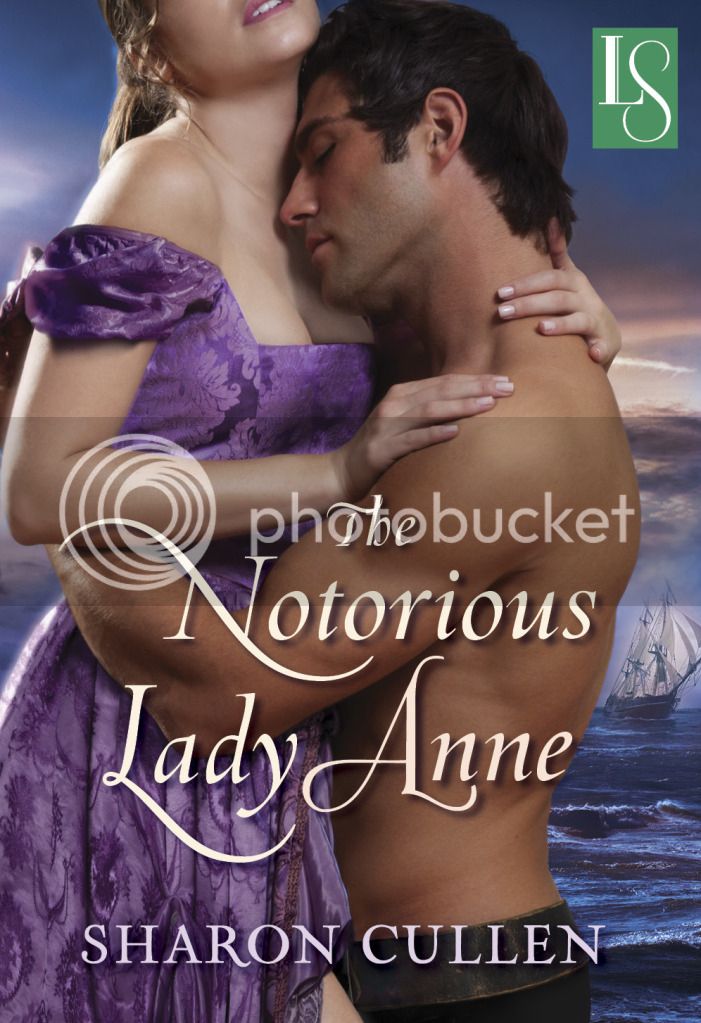 6/12 - Her Dark Knight (Carina Press) will be released in print and sent to all Harlequin subscribers in January, 2013. The book will also be available in print on Harlequin.com

3/12 - Wherever You Are is now available in paperback

Multi-Author Blogs I'm a Part Of

Click on the image to visit the Romance@Random blog